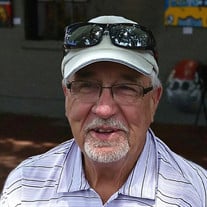 Danny Earl Naylor age 75 passed away in his sleep at his home in Guntersville on Monday, 7/5/2021. Danny was born on 9/19/1945 to Earl and Pansy Naylor. He grew up in Aroney, Al. and attended Crossville High school. He loved sports and lettered in all the sports in which he participated. After graduating from high school in 1963 he pursued a business degree at Snead College and then a data processing degree at Gadsden State in 1967. In 1964 he joined the Alabama National Guard; did basic training at Fort Gordon in Georgia and was part of the Signal Corp during his tour of duty. In 1967 married Joan Jones (deceased) of Boaz and had two daughters, Christi (deceased) and Christn. He later remarried to current wife, Pat in 1987. His first job was in construction and in 1969 worked for 7 years at the Marshall Space Flight Center for Computer Science Corp in Huntsville, Al. In 1976 he started work at TOCCO Inc. in Boaz, Al. in the Production Control Dept. during which time he pursed a Bachelor of Science degree from the University of Alabama and retired as Purchasing Manager in 2009. In the 70’s Danny was an avid fisherman and was a charter member of the Boaz Bass Club. In the 80’s he started golfing and has enjoyed it throughout his life. He was part of the company golf league and played in numerous tournaments with friends. One of his most memorable moments was sharing a photograph with professional golfer John Cook. He and wife Pat enjoyed taking road trips with Hilton Head being a favorite destination for of course, golf. Danny enjoyed reading books by authors Patrick McManus, John Gierach and recently Hemingway. He was the main cook in the family, trying different recipes and cooking out on the grill. Dare not to mention his love of Alabama football; wife Pat had to be in a no talk zone when Alabama was playing on TV. He had many good long term friendships and made friends easily with his talent for small talk and ability to share what he called “useless information”. He thoroughly enjoyed family gatherings, especially time spent with daughter, son-in law and grandchildren. Most memorable, sharing his fisherman skills with grandchildren when they were younger. The stories they can tell! His family was very important to him. He made a point of staying in contact with relatives and always willing to give a helping hand. He was survived by wife, Pat Naylor; daughter, Christn Campbell (Scott); grandchildren, Brie Campbell (Payden Jeffreys), Hunter Campbell (Morgan) and Grayson Campbell (Chloe); great-grandchild, Gunner Campbell; brother, Gary Naylor (Vickie); nephews, Jesse Naylor (Lacy) and Jeb Naylor (Anna); great-nephew, Samson Naylor. He was preceded in death by his parents; Earl and Pansy Naylor. The family chose cremation per Danny’s wishes; the arrangements were entrusted to Albertville Memorial Chapel. A Memorial Service will be 2 p.m. Saturday, July 24, 2012 at Albertville Memorial Chapel with Visitation from 1 until 2 before the service. In lieu of flowers, please send donations to the American Heart Association.

Danny Earl Naylor age 75 passed away in his sleep at his home in Guntersville on Monday, 7/5/2021. Danny was born on 9/19/1945 to Earl and Pansy Naylor. He grew up in Aroney, Al. and attended Crossville High school. He loved sports and lettered... View Obituary & Service Information

The family of Danny Earl Naylor created this Life Tributes page to make it easy to share your memories.

Danny Earl Naylor age 75 passed away in his sleep at his home...

Send flowers to the Naylor family.