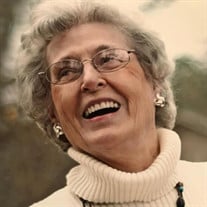 Doris Marie Skelton Yeats, 90, of Rainbow City, passed away Friday, March 18, 2022. Born in July to Howard & Nell Skelton, Marie was one of four children, the only girl, & grew up in Attalla. Her family owned & operated Skelton Grocery for many years. She was a graduate of Etowah High School & attended Snead State Community College. She married her high school sweetheart, Don Yeats in November of 1950. She was a devoted military wife & supported her husband throughout his years in the United States Air Force. She raised their three girls in many locations across the US & created many lifelong friendships during their stops in Texas, Virginia & Hawaii, to name a few. She & her husband finally settled back in Alabama where she then became an ‘Avon Lady' for 35 years. Marie was never one to speak a cross word about anyone & will be fondly remembered by her family. She is preceded in death by her parents; her husband of 60 years, Don Yeats; brothers Bishop Skelton (Shirley) & Johnny Skelton; brother-in-law Thomas Yeats (Marcy); sisters-in-law Josephine Yeats Watts (Charles) & Kathryn Yeats Fossett. She is survived by her brother Paul (Jackie) Skelton & sister-in-law Irene Skelton. Daughters: Paula (Billy) West, Jane (Rex) Higgins, Pam (Brent) Bottoms; Grandchildren: Kristin (Kevin), Angie, Hunter (Brooke), Katie (Rory) & Trent; Great-grandchildren: Emily, Ryan, Hudson, Kendyl, Grady, Geordy & Siddalea; & numerous nieces and nephews. Special neighbors & longtime friends: Cheryl Owens, Luther & Linda Riley. The family would like to thank Stephanie & entire staff at Rehab Select in Albertville, who gave her such loving care. As well as Christy, Randie & all caregivers from Shepherd's Cove Hospice who enriched the last few weeks for both Marie & family. In lieu of flowers, donations may be made to Big Oak Ranch, Shepherd’s Cove Hospice, St. Jude or the charity of your choice. A private service will be held at a later date. Albertville Memorial Chapel Directing

Doris Marie Skelton Yeats, 90, of Rainbow City, passed away Friday, March 18, 2022. Born in July to Howard & Nell Skelton, Marie was one of four children, the only girl, & grew up in Attalla. Her family owned & operated Skelton Grocery for many... View Obituary & Service Information

The family of Doris Marie Yeats created this Life Tributes page to make it easy to share your memories.

Send flowers to the Yeats family.