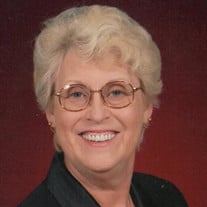 Ann Canady of Albertville passed away Monday, May 24, 2021 at Marshall Medical Center South. Ann was a loving wife of 56 years. She raised two daughters, and unofficially adopted many more through Charlie's work with Scouting. She gave freely of her time during Covid to sew mask for those who needed them. Over the years she worked on multiple homes in the Huntsville area with Habitat for Humanity. She was a long time member of the North Broad Street Church of Christ, where she served in many different capacities. For many years has been called, affectionately, Momma Ann. Not only by her grandchildren, but by many others whose lives she touched. Ann is survived by her husband Charles Canady, her two daughters, Tracie Predmore, and Lesa Swords, as well as three grandchildren Blaine Hargrove of California, Cody Dunsmore and Grey Swords of Albertville, and one brother Don Holcomb of Florida. She is also survived by 12 nieces and nephews, as well as her best friend Margie Head. She is proceeded in death by her parents Hoyt and Polly Holcomb, her in-laws Verbon and Mary Canady, and sister Brenda Daniel. Her funeral service will be at 2 p.m. Thursday, May 27, 2021 at Albertville Memorial Chapel. Burial will follow at Memory Hill Cemetery. Visitation will be from 12 until 2 before the service. Tom Scott and Liz Hurley (Eulogy) will be officiating the service. Pallbearers will be, Grey Swords, Rodney Canady, Scott Canady, Steve Kaple, Jordan Hargrove and Chris Canady. Honorary pallbearer will be Marjorie Head. The family has requested flowers or donations to Shepherds Cove Hospice. Albertville Memorial Chapel Directing

Ann Canady of Albertville passed away Monday, May 24, 2021 at Marshall Medical Center South. Ann was a loving wife of 56 years. She raised two daughters, and unofficially adopted many more through Charlie's work with Scouting. She gave freely... View Obituary & Service Information

The family of LeDonna Ann Canady created this Life Tributes page to make it easy to share your memories.

Send flowers to the Canady family.