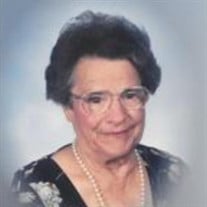 Rosie Christian Lee, 100, went to be with her Lord on March 24, 2020 in a local health care facility. A resident of Albertville, she was born Feb. 12, 1920, at Altoona, AL, the fifth child of William Joe and Hattie Clanton Christian. She was a member of New Home Baptist Church. Her life centered around her family. She was a loving mother and grandmother, a devoted and sacrificial care-giver for her parents, her children, and her husband, and willing helper to friends in need. Rosie and J.H. Lee were married on December 25, 1935 at her parents’ home. They worked hard during the Great Depression as tenant farmers in Etowah and Marshall counties. Their six children were all born at home between 1936 and 1950. They scratched out a living as dirt farmers by manual labor, aided by mules and horses, for most of their first 40 years. They lived in at least 17 different houses. They owned only two of these. Their last decade on the farm they worked for chicken farmers, helping raise broiler chickens. When they retired in 1982, they bought a home in Albertville where Rosie lived for 38 years. She was preceded in death by her husband of 59 years, Johnnie H. Lee, and by their first-born infant son, William Jody, their daughter, Frances Louise Whisenant, and two grandsons, Joel Byron Lee and Johnny Whisenant. Preceding her were her three brothers, Louis, Eddie, and J.L. Christian, and eight sisters, Essie Beasley, Effie Arwood, Marie Loftis, Velma Eakes, Lucille Yates, Emma Moody, Myrtice Collins, and Kathleen Chandler. She is survived by four children, 11 grandchildren, 21 great-grandchildren, and 7 great-great grandchildren, as well as hundreds of nieces and nephews in four generations, including the great-great-greats. Surviving family include sons, Ollie (Ruth) Lee, Cleveland TN., Odell (Wanda) Lee, Albertville, and Nolen (Betty) Lee, Cleveland TN, daughter, Sadie Johnson, Albertville, and grandchildren Jonathan (Patricia) Lee, Andrew (Esmerelda) Lee, Timothy (Tammy) Lee, Melanie Chamblee, Monica Freeman, Sadie (Michael) Benefield, Teresa (Richard) Nason, Marion (Pam) Gibson, Christopher (Beth) Gibson, Jason (Christy) Botts, and Brent Lee. Albertville Memorial Chapel has charge of the arrangements. In view of the national emergency and the public health guidelines of the CDC, there will be no visitation at the funeral home. There will be a graveside service, for the family only at Memory Hill Cemetery, Albertville on Friday, March27 with Pastor Joey Cannady and Dr. Ollie Lee officiating. The family expresses deep gratitude to our sister, Sadie Johnson, for her years of sacrificial and loving care for our mother. We also extend thanks to the caring staffs of Hospice of Marshall County and Kindred Hospice for their help in time of need.

Rosie Christian Lee, 100, went to be with her Lord on March 24, 2020 in a local health care facility. A resident of Albertville, she was born Feb. 12, 1920, at Altoona, AL, the fifth child of William Joe and Hattie Clanton Christian. She was... View Obituary & Service Information

The family of Rosie Lee created this Life Tributes page to make it easy to share your memories.

Send flowers to the Lee family.